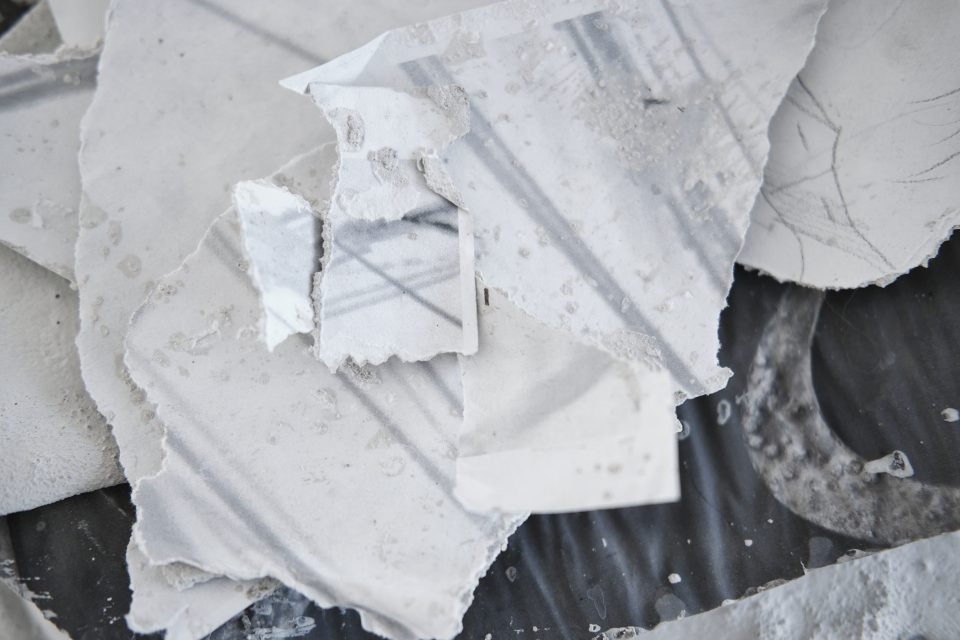 In her exhibition at Drawing Centre Diepenheim, Kramer combines monumental forms with a visual language inspired by drawing. Through the multitude of works, the connections between the various objects and Kramer’s circular work process become visible. This process of development, reaction and association underlies not only the individual works, but the entire presentation. Observations and reflections on existing work give rise to new drawings and sculptures. During the creative process, from drawing to concrete sculpture, Kramer encounters boundaries such as size, weight and balance. These physical limits make her ‘redraw’ the work, she has to go back to the drawing board. That makes drawing a circular act for her: the drawing is the object and the object is the drawing.

Drawing tables are on view in one of the rooms. By casting her drawing table in concrete at various points during the preparation for the exhibition, Kramer pauses time for a while. She shows that casting an idea in concrete does not have to mean a definitive reality, the drawing board is both the work itself and the idea of ​​that work. The public steps into the artist’s world of ideas, becoming part of the work, rather than just an observer.

Kramer embraces her limits and incorporates them into her practice. Her own strength, scope, or lack of mathematical understanding all become part of the world she has created here. The concrete gives the works mass and weight, and a monumental appearance. Observed more closely, it reveals all

sorts of small worlds, and ineptitude and doubt are visible, because the concrete has taken over all the information from the drawings, all the steps in the process. However monumental and solid some works may appear, because they seem to balance, sometimes need to be propped up and supported, they harbour doubts. The imbalance in the works provokes a physical reaction in the viewer, the inevitability of gravity evokes a feeling of restlessness.

The works thus form a metaphor for fear and uncertainty. The feeling that gravity could win over a structure makes a link to human existence. How strong are you as a person? Do you dare to cross a threshold, to take a step? Where do you look for support? Is our own support system as robust as we hope? Kramer shows us that life consists of balancing between certainty and uncertainty. That it is precisely the search for balance that destabilises us.

With ‘The Unbalancing Act’ Kramer shows that everything is based on an idea, everything is essentially fiction. It is a story about imbalance, about wobbling and the process of trial and error.

In the exhibition Kramer gives space to these fictional and factual stories, thereby breaking with the logical perception and the associated expectation.